The impact of living under the Confederate Culture

Posted on June 23, 2015 by VisAbleblackwoman 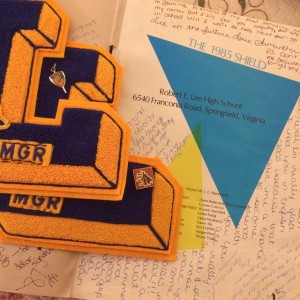 I’ve always hated Virginia.  When people ask me where I’m from, even though my parents moved our family to Virginia when Dad retired from the Air Force  when I was 4 years old, I do not claim that state as home.  “I’m an Air Force brat, born in Japan” I say proudly.  Or, “Well, I’ve lived in NYC for almost 20 years…that makes me a New Yorker.”

My parents picked Northern VA for the public school system.  Particularly the neighborhood in Fairfax County.  Affluent, safe, great schools…the perfect fit and yes, the education was great….well except for the guidance councelors who advised the black kids to aim for secretarial or service industry work.  The field trips to plantations.  I had been to Mount Vernon so many times I could have been a tour guide.

I remember the difference between when we took field trips to Mount Vernon versus when my parents took us when my Granddaddy Robbie McCullough from Kingstree South Carolina was visiting in 1976.   Granddaddy was a tall man, his 6 ft 4 frame slightly bent from years working on his farm, and I was a small girl.  I remember having to almost walk on my tippy toes in order to hold his hand.   I remember his face looking at those slave quarters when we were at Mount Vernon.  He had the eyes of a survivor.   He told me stories of outwitting the KKK when he was a young man, daring escapes being chased over railroad tracks when he was a young man with his crew of friends.  He told me of friends lost, crosses burned, women taken only to be returned ruined and sent north to avoid  bearing the shame of being in the wrong place at the wrong  time when any horny white boys or men were on the hunt. My granddaddy told me the true legacy of the confederate flag. I was six years old.

When I was visiting Mount Vernon on field trips with our school group, no one talked about the difference in the slave quarters and the big house, there were no tales of the KKK and lynchings and rape.   The tour guides made sure to point out how our first president was a kind slaveowner and Mr. and Mrs. Washington treated their slaves well.  The tour guides ignored me when I asked where the fireplaces were in the slave quarters.  How did they stay warm in the winter?  I was well behaved enough back in those days to keep my mouth shut on these tours.  But I walked in that mansion and I thought of the black women who kept the place immaculately clean.  The black women who cooked gourmet meals for our first president and his wife and worked the land that created a life of privledge for the Washington family.  As I looked at the fine furniture, the beautiful building, I remembered that slaves built this brick by brick by hand and it was still standing.

Growing up black in Northern Virginia, my West Indian Father and South Carolinian mother told me the truth about living in and methods of surviving in the south during the Jim Crow era.   They took me to Harper’s Ferry and I wondered what our world would been like if the revolt had been succuessful. That knowledge made me a skeptic.  When the teachers taught the confederate bullshit about the Civil War in the fourth grade, I did my own research and came back with reports on Harriet Tubman, John Brown and the history of the KKK.  I scared my teacher, and that was good.

When I was in Middle School, they changed the boundaries with my grade and instead of going to West Springfield, HS… I had to go to Robert E. Lee High School.  I loathed that school.  The confederate flag flew below the State flag next to the American Flag which had a pole of it’s own.  It was disgusting.

Then, I remember my senior year of High School, our class used to do a lip syncing show based on the TV show in the 80’s “Puttin on the Hits!”  People would lip sync to songs and whoever was the most convincing won.  So, starting in 1984 the class of 1988 did our class did “Puttin on the Hits!” as an annual fund raiser for our Senior Prom.  It was quite popular.  I was one of the managers of the track team  and I choreographed 5 guys from the team, they did “My Girl” by the Temptations.  It was my take on Gladys Knight and the Pips…There was one who was the main singer and his 4 back up singers who couldn’t do the choreograpy.  The main kid was black, the backup kids were white. It was cute funny and tasteful.  Then there was a group from the football team (Lee’s football team sucked…had the worst record)  They did a song by the 4 tops… and wore black suits, black face and afro wigs…and they won.  I remember watching those boys act like fools in blackface from the wings.  It was both humiliating and infuriating at the same time.  I looked out into the audience from my veiw…and the white people were going crazy…laughing, clapping whistling.  The few black people in the audience were silent.  A few booed, some parents and students left.

The track team and I stood there stunned. The group I choreographed came in third.   The football players in black face won. The guy who was the emcee was this African American kid Nick, who was a fantastic break dancer really popular and had graduated the year before immediately  tried to calm the situation with humor.  I immediately went to our student advisor, who was my favorite AP English teacher, Mrs. Borden and I said “How could you have let them do that?  How could you?”  She turned bright red and replied, “They did not use the makeup in rehersal.”   I told her how dissapointed I was in her and how embarrassing that was how humiliating.  I was disgusted.  She ended up speaking with the principal and I had to go in to speak with him on Monday.  This happened in 1988.   Those boys knew what they were doing was racist but they pleaded ignorance and at the same time said that those of us who were offended were oversensitive and had no sense of humor.

The senior class ended up having to have diversity training during first period for a month to learn about racism and tolerance.  I remember speaking up about injustice in class, there was one other black person in class, one of my best girlfriends… she stayed silent while I took on the whole class explaining why blackface was racist.  It sucked,  and I never spoke to that girl again. This thing happened around Homecoming time. The whole class ended up hating me my senior year.  They said I was just jealous because the football players won.   No one asked me to Homecomeing. I got notes on my locker, no one asked me to prom, and even at graduation in June when I crossed the stage to get my diploma… I got booed.

I always hated living in Virginia, but now I’m here and I’m grateful.  Growing up under this Confederate Culture has made me able to speak about race and raise the level of consciousness when it comes to racial injustice and intolerance.  I know this country’s history.  I know the negative impact of living under the confederate culture and how we need to never forget our shared history and how this country was built on free labor, injustice, slavery and fear.  The founding fathers gained their freedom by enslaving and dehumanizing a entire race.  500 years of oppression cannot be erased by 8 years with a bi-racial president.

That flag is a symbol of lynchings, murders, terror and rape…is that southern pride?

It’s time for the truth of what the Confederate Flag and the sick ass plantation culture of the south truly represents…injustice.